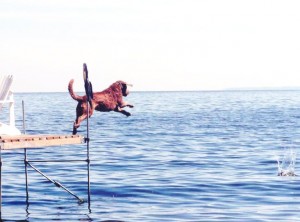 Hunter came into rescue about 1 week after Nestle left us for the Bridge. When we went to pick Hunter up, it was love at first sight. He was a big bone head, full of love and had the cutest big ol feet I ever saw. When he trotted along he picked his feet up like a big draft horse. Some one had also painted his toenails –so we knew he was going to be a good dog-what else but a good dog would allow his toenails to get painted. Hunter never met anyone he didn’t love. He LOVED to swim, and he and Kona had many swims together before she left for the Bridge the following Fall. Hunter loved rides, he loved to retrieve, he loved to put his head on our laps and get his ears “ironed” Hunter almost went to the Bridge one summer evening when he bloated and torsioned-he had emergency surgery and barely survived. But he did pop back and we don’t know what caused the bloat-but we had his stomach stapled during that surgery so it wouldn’t happen again. A couple of years later he was diagnosed with Inflammatory Bowel Disease during an exploratory surgery. He went on a special diet and did well for a few more years-then his back end and back legs gave out on him-he lost his ability to get up and down and was not having quality life -so we let him go to join Nestle, Kona, and Ernie. Hunter was a sweetheart and he is missed.