All too often we get a few Chessies that do not find their forever family, but they find a forever home with us. CRROW does everything we can to find a home for every dog but some dogs are given to us too late in life and we can not find an appropriate home for them. These are mostly seniors, some have too many medical ailments to find a forever family and some have behavioral issues that require they stay in an environment that is safe for them and others. We call these our “Rescues that Stay”

Our current Rescues that Stay are: 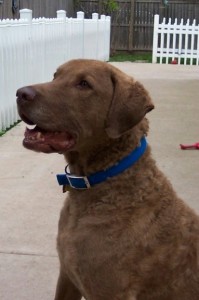 Willie
Willie came to us in 2006 at age 8 from a Milwaukee Shelter. He came to the shelter due to his owner being charged with neglect. Willie had been tied to a picnic table on a short chain in the dead of winter. No food or water and no shelter other than under the table-but the chain was too short for that .  When he was admitted, his front legs were raw and bleeding due to trying to get loose when he was tangled in the table. He was treated for his wounds at the shelter, and once the court had released him to the shelter, we were called and went to bring him home. Willie had a chance at a new home, however, the resident cat would not adjust to him, so he came back to us. (Read more about Willie) 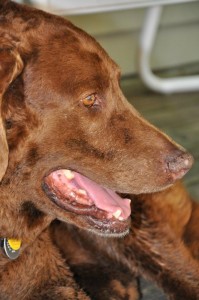 My name is Lula and I am a “big boned” female. My foster mom says I look and amble like a Grizzly Bear Cub but I am much sweeter and just as cuddly. I should really define “big-boned” as it is pretty significant in my current situation. I weigh 113 pounds and am not overweight; I am just a Big Girl. I was left tied to the gate of a recycling center near Duluth, MN in August of 2009 and was in 2 shelters before CRROW came and got me. I had to learn how to live in a house and how to accept and give affection to humans. I initially only wanted to hang in the garage in my crate and be left alone. (Read more about Lula)