Progressive retinal atrophy, or PRA is a hereditary, blinding disorder. in all . PRA is a disease of the retina. . In all canine breeds PRA has certain common features. Early in the disease, affected dogs are night blind, lacking the ability to adjust their vision to dim light; later their daytime vision also fails. As their vision deteriorates, affected dogs will adapt to their handicap as long as their environment remains constant, and they are not faced with situations requiring excellent vision. At the same time the pupils of their eyes become increasingly dilated, in an attempt to gather more light, causing a noticeable “shine” to their eyes; and the lens of their eyes may become cloudy, or opaque, resulting in a cataract. The big difference in PRA among breeds is in the age of onset and the rate of progression of the disease. Certain breeds, have early onset forms. In these breeds the disease results from abnormal or arrested development of the photoreceptors the visual cells in their retina, and affects pups very early in life. In other breeds, PRA is much later in onset. Affected dogs in these breeds appear normal when young, but develop PRA as adults. Diagnosis of PRA is normally made by ophthalmoscope examination. This is undertaken using indirect ophthalmoscope, and requires dilatation of the dogs pupil by application of eye drops.

PRA can progress very slowly, and many dogs have useful vision for quite a few years. Low light and night vision is affected first. They may have difficulty in stairwells etc. Dogs adjust well to this gradual loss of vision and can lead comfortable and useful lives

Both Buddy and Jess were adopted from Minnesota. Jess came from a shelter in Wisconsin and was a very special case when she was taken into the rescue system. She had heartworm and X-rays showed she had been shot full of BB’S . She also had the first signs of PRA. Ruth cared for her and once she was back to health she drove her to her new home in Virginia. Stories like these just warm our hearts. With people like this to adopt our special needs dogs we always feel blessed in the work done. A special thanks to Ruth for all the work she does out there in Minnesota to help the Chessies. 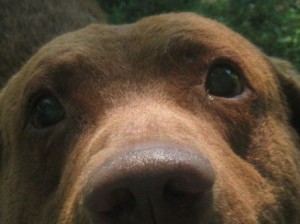 I adopted Buddy in March 2002. It was Buddy’s story that made me “have to have him”! Friends of ours were instrumental in creating the Renville/Sibley Humane Society. Jim stopped in my office at work and said that they have a web site and I didn’t have to go to the pet store adoption days to check out the dogs anymore! His exiting words were “Check out Buddy’s story”.

Buddy is a beautiful Chesapeake Bay Retriever (if I may say so myself!) who was found during the winter of 2002. January or February is when his life changed dramatically. He lived in a small town, in a trailer house. There was a fire and the trailer burned. Two weeks later, during the Fire Marshall’s inspection, he came across Buddy sitting next to a burned out recliner. The owners could not be found after the fire and they did not come back for Buddy, unless they thought he died in the fire. After several days with his foster parents, Jim and Joyce, he started bumping into walls and tripping over things. His diagnosis? Progressive retinal atrophy or PRA, which is a hereditary, blinding, disorder. I have no idea as to his age, he does not have any gray hair on his muzzle but yet his teeth show real wear and tear. I am guessing he is around four years old. One thing I find sadder than his blindness is that this terrific dog lost his name. He is perfectly happy with “Buddy” but I do wonder about his nickname and his registered name.

An adoption issue that arose was an issue that my husband was concerned about. He thought it would be unfair to our two dogs, Molly and Nanook to bring a third dog into our family. I thought that buying a puppy would be unfair, as one of them would be “third dog out”. I began my plan of attack on my husband with my idea of adopting Buddy. I made many copies of his adoption photo, cut his picture out and hung them all over the house. My husband wondered why and I told him it was to get used to seeing Buddy everyday. I went to see Buddy and fell in love with him at first site. He brought me an empty “Subway” cup and wanted me to throw it so he could retrieve! He has been well trained and I can tell his family had loved him in the past.

How is Buddy getting along at our place? He loves living on a farm. Introducing him to our dogs was an interesting process. My husky has an alpha personality and so does Buddy. We had one argument as to who was boss and my husband pulled them apart (I don’t recommend that!). The husky, Nanook, got mad at him about that decision and ignored him for four days! Then there was the argument over the bone. Buddy wanted all the bones! Nanook bit him in the ear and she is now the boss! Molly, my golden retriever mix, let him be boss instantly. They totally ignore each other but yet are fond of each other. This weekend I found Buddy in the barn, sleeping next to the gate of our dog pen (huskies do like to run!) where he could be close to the “girls”. The girls have ¼ of the barn complete with windows, a screen door and their doghouses.

When I brought Buddy home, I penned him up for two weeks until I could see what type of habits he had. He could not be a housedog anymore. He would just ooze sadness when I would put him in his pen after our walks. This Chessie shows his heart on his sleeve. He looks so sad when I leave for work each day. One day he had enough of his pen and tore his way out. Talk about determination, he pulled two 2 x 10 boards off of his pen and crawled out, jumped over two horse box stall walls and found his way under the electric fence. He had pulled the nails out of the wall along with the boards-he is a very strong dog! We found him sleeping on our front steps. He just has to feel close to us.

Buddy has incredible devotion and is always at my side. Going from a husky, who is very independent to a Chessie who ever adores, is a nice change! He is always in a retrieving mode! His blindness doesn’t stop him from doing anything. He is not totally blind at this time. He has night blindness and has trouble seeing in the house. He has trouble spotting his toys unless it is a ball that is moving. I buy him squeaky balls, as it squeaks every time it bounces so he can hear where it has gone. He does almost everything else by scent. He can find his toys with his “bird-dogging” pattern. He has never come up empty! He swims every day down at the drainage ditch when we take the girls for a walk. One day he brought a bone on our walk and he set it down on the water (just like he does with his ball!) and it sunk. He spent a lot of time diving for the bone. He looked like a hippopotamus! I bought him his own wading pool so he wont wander the ¼ mile down to the ditch on his own.

We are now putting up a 100 x 50 fenced area for our “kids”. There are days or portions of days where I will have to have Buddy penned up to keep him safe from 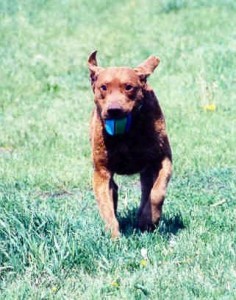 moving farm equipment, delivery trucks etc. I called our soft water supplier and our Ag service center and informed them about Buddy’s blindness with strict orders to watch out for him. I will be more relaxed when the pen is done!

This photo of Buddy is in full retrieving mode! He is out in our yard where he can run without worrying about the trees. His blind eyes still show the determination he has. He is running to catch up to me and you can see in his eyes that he is on a mission!

Here are the words that describe my Chesapeake Bay Retriever: “Devotion, adoration, love, determination, with a little bit of stubbornness tossed in!” 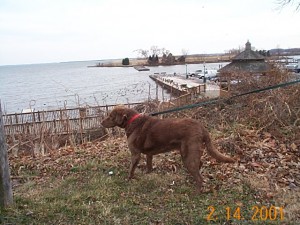 Spring? It ran right into summer! Jess has turned into a really pretty “normal” dog now. She was pretty clingy and protective (that was okay certainly) but she has mellowed out so she doesn’t have to follow every movement I make. She is FULL of spunk and is very definite about snuggles and her place in the bed! She is a real riot! As soon as she has recognized that I have woken up, she sits up and THROWS herself against me and tries to snuggle up “spoon style” and grunts! Every morning! It’s great, then she waits for me to shower and then she jumps down, off to the bird cage and whines, I get the birds and we all go downstairs, birds get fed, I get coffee, she gets her ball (it flashes so she can find it!) and she and I go out perusing the neighborhood and a nearby wetland (lotsa ducks) for 45 minutes. We are both in heaven! I do think based on her recent behavior she may be better off being an “only babe”.

Like a goof, I had her picture taken w/ the Easter bunny and will send you guys a copy.

We are very, very VERY happy together. I cannot thank you enough for all you did to bring her to me. I can’t wait for you to see her in August. She is one very happy camper, she grunts when she’s really happy – sometimes I have to turf her outa bed! (just kidding!) I was amazed recently while we were out hiking the canal, people were commenting on how obviously “connected” we were. We move as one, she has been absolutely excellent in the field and an absolute star in the office (barring one peeing incident!) I previously thought most her “attachment” was her dependency as a result of her loss of sight, but I think that (especially) over the last month that has changed to joy in being companions and in her relinquishing the last of her reservation of trust to me. She loves to wrestle and I love her sense of play, we are both goofs in the park! We have no problem communicating and have had no discipline problems. I couldn’t ask for a better life partner.

With all our hearts,