Well today was our first day of Basic Obedience 2/Agility. Shirley and I were not sure how Louie would do or how he would react so we were very cautious. 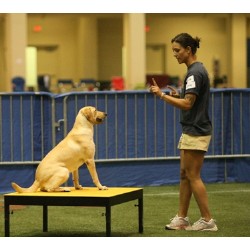 I started with the table. He did super. We were in a large fenced in area with 9 other dogs and about 16 people. Classes are at the Humane Society so there are lots of dogs out barking and things going on. In addition, the shelter is surrounded by prairie grass with LOTS of birds. Needless to say Louie was very excited watching birds and everything going on around him. The table was a good place to start to try and get him to focus. We were not very successful at focusing all evening but he really loved the agility. After we jumped on the table a number of times and sat and then laid down, we moved on to some of the jumps. There were a variety of jumps from a hoop to an octagon and then a straight bar like I used to jump when I rode horses (much smaller though!)! Louie easily jumped over and through each without hesitation. He did duck around them a few times but mostly jumped over and through. 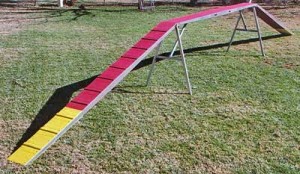 After the jumps we tried the lower dog walk. He did pretty well on the dog walk, jumped off the side a few times but then got the hang of it. After he walked confidently across the smaller dog walk, I had someone stop him on the other side and we tried the BIG dog walk and he did great! He did try and jump off the down ramp at the very bottom but again after a few attempts he was ready to trot up, across and down.

We then moved on to the A-frame. The A-frame is small and it took Louie a few attempts to realize he shouldn’t leap up to middle and then run over the top and leap off the other side. You could see his confidence growing with each obstacle. Now it was time to try some of the tougher equipment.

We started with the tunnel. 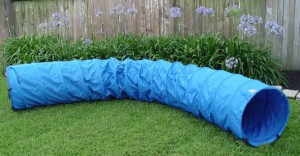 Shirley had it collapsed so it was very short. She took Louie’s leash and I went to the other end to call him. Initially he tried to go around but as soon as I caught his eye through the tunnel, he ran to me. Each time we did it, Shirley made the tunnel longer. Within a few times, Louie was running through the full length without hesitating. We then tried it with me dropping the leash and running to meet Louie at the other end and he almost beat me through the tunnel!

Next obstacle was the chute. Again Shirley had Louie’s leash at the start of the chute and I went to the other end and held the fabric up so he could see me and he ran right through. Each time I dropped the fabric on him sooner and pretty soon he was running through with the fabric dropped immediately. I then I tried it alone with running him up to it, dropping the leash and meeting him at the other end – Well that was the plan! Louie got so excited, our feet got tangled and down I went! Belly flop right in front of the chute. Louie continued on without me and ran through and then did a few wild victory laps around the agility yard! I finally caught him and we tried again. Again he got so excited and ran so fast he beat me to the end and did another round of victory laps! How embarrassing but Louie was having a ball!!! He ignored all of the other people, dogs and just ran full speed having a grand time! Hmmm, we are going to have to work on “Come when called” and waiting at the end of the chute! Even with my real homemade steak treats Louie would not come when called! But he was socially acceptable and did not bother any of the other dogs or people (kind of Yeah Louie???). 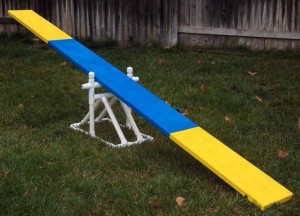 Last obstacle to conquer – Teeter-Tooter! Shirley assisted us by letting the teeter-tooter pivot slowly down once we crossed the midpoint. Louie did great and wasn’t bothered at all. We did it with assistance several times and then we tried it alone with me steadying the descent on the other side and Louie did great! We didn’t try it full blown with it banging down as he crossed the midpoint. We have to leave a challenge for next week!

So I am shocked and pleased with his performance. While he was not obedient, he had fun, and he was socially acceptable with a brand new group of dogs and lots of people. While we have a lot of work to do on control, I think this might be a good activity for Louie. Can’t wait to try it again this weekend with Patti at Chessie Weekend!!! And I had a blast! One of my co-workers suggested I wear old jeans when I told her what I was doing. I laughed and said, “Why?” She said in case you get grass stains, you don’t want to ruin your nice jeans! Well good call Brenda! I have not had grass stains on my knees from playing chase outside in YEARS!!! What a fun day!