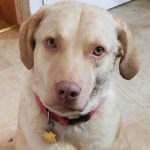 Koda is a 3 yr old neutered male that came to CRROW after his owner died. Koda’s owner had Alzheimer’s so Koda had run of the small town and fended for himself. When Koda arrived we immediately noticed his lack of muscle in his hind end. His gait is very stiff and he has a difficult time doing short flights of stairs. He could manage 2-3 steps. He loves to go for walks but he walked like an old dog. We initially thought he might have been hit by a car during his escapades around town in his previous life.

On May 10th he went to the vet for x-rays and found he has severe hip dysplasia in both hips. Due to his young age and wonderful disposition with people, he was scheduled to have a femoral head and neck ostectomy on one of the hips on June 6th. On December 20th had the second hip done. Koda is doing well with his rehab on his second hip.

Koda’s hips are fixed and he is walking well!  Koda LOVES people, LOVES to snuggle. He okay with other dogs but isn’t really interested in them. I am assuming he had opportunities to encounter other dogs while he was running free but I suspect his lack of flexibility in his hips made him wary of engaging with other dogs. He is a fast learner and wants to please. Koda will make someone a very loyal companion. 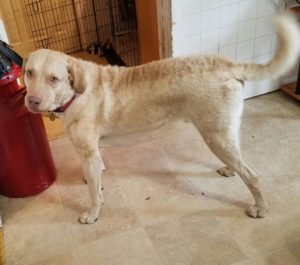